When Are Your Darlings Ready to Fly?

Spring is here, and birds will soon fill the skies, just as manuscripts will soon fill the internet. But are your little darlings ready to push off that metaphoric tree limb? Ready to lift their wings up, up, and back, exposing their hearts to the arrows? Yes. Arrows.

First, is your eaglet mature enough to fly? Many years ago, I wrote a sci-fi novella that was read and praised by friends and family, but not by a brutally honest critique group or a non-biased person who would have asked the right questions, the hard questions I needed to answer. It passed the scrutiny of a Beta Reader, but not one well-read in sci-fi/fantasy. Finally, it had not been exposed to a line-edit or a developmental edit. I discovered, after the fact, there were places where the feathers hadn’t quite grown out just yet – basic things like adequate research, POV, consistency in character development. For instance, I tended to head-hop and didn’t realize it! Since I prefer omniscient points of view, I wasn’t as careful as I should have been when it came to whose head I was in.

Second, do you have a flight plan? Being in a hurry to see one of my fledglings airborne, I put it out on Amazon prematurely. Had I researched the company that charged me a great deal of money for the privilege of doing so, I would have chosen differently. This was several years before I discovered like-minded birds of a feather who flocked together every Thursday night—not only to critique one another’s work, but to exchange information on publishing options and articles/books/webinars to hone our craft. When I pushed my novella off the branch, I had no idea where it would go. I remember laughingly calling it “a learning experience.” It turned out to be not so funny when, years later, I swallowed my pride and called it back home again. Lesson? Know where you’re going and how to get there.

Third, can your darling make it back to the nest?  Now that we’ve survived the rise of the self-publishing robots vs tradition publishers and are accustomed to being buffeted about by the winds of change, we are told to have a platform. Imagine. Introverted artists being told to “put yourself out there.” Duh. Like the majority of writers, I have great difficulty in that area, and tend to stay away from social media. However, I have left the safety of the nest—when forced to forage for food—and now have a website with blogs. I’m even looking into twitter. Whew.

It’s a cold, cold world. In order to survive, we have to stick together. Sometimes I hum the first three lines of an old Leonard Cohen song, “Bird On The Wire” (like a bird on the wire, like a drunk in a midnight choir, I have tried…in my way…to be free). This brings me to my saving graces—namely, my critique groups. Have you ever watched birds flying south for the winter? They lift off individually from tree after tree to join the others and form a perfect pattern. Writers need other, like-minded writers so we don’t get stranded for the winter. If you haven’t done so already, find a group. If the first one doesn’t click, find another. Form your own. Go online for groups in your area. Sure, it looks good on a bio, but more importantly, you’ll hone your craft. And that’s what it’s all about.

How do you know when they’re old enough? When you’ve done all you can do to prepare them for what’s out there. One morning you just know, when you watch them pick their way to the end of the tree limb, teeter a little, then lift their wings and take to the sky.

Thanks for walking through the corridor with me.

In Ireland, you can find many different mounds and standing stone that are actually “passage tombs” consisting of one or more burial chambers covered in earth or with stone, and having a narrow access passage made of large stones. They usually date from the Neolithic Age, and are found largely in Western Europe. A popular one dating to 3200 BC is in Newgrange (photo on left). Passage tombs have also been found in France, Sweden, and other countries.

“The passage itself, in a number of notable instances, is aligned in such a way that the sun shines through the passage, into the chamber, at a significant point in the year, often at sunrise on the winter solstice or at sunset on the equinox. Many later passage tombs were constructed at the tops of hills or mountains, indicating that their builders intended them to be seen from a great distance.” (Wikipedia) 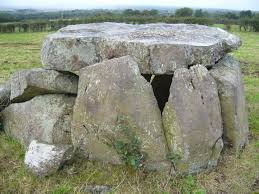 Aside from my Irish ancestry, I found these fascinating. In some instances, they provided “the light at the end of the tunnel” but many contain megalithic art in the form of spirals, suns, and astronomical drawings. I always thought they mirrored the “passing through” of death into life.

I chose my favorite picture to use at the top of my blogs in the fanciful hope that you would join me as we journey from a curious idea down a passage of exploration into the light of knowledge.  Sorry, no artifacts. That “wanting to know more” is what makes us unique, both as writers and as humans. I often think of Caden’s Corridor as a time tunnel from what is into whatever may be.

Yes, there is life after writing. But first, you have to suffer. You have to find the courage to walk into the darkness. You have to die a little. But oh, the joy when you come out the other side into the light with the perfect sentence, a long-awaited answer, or better still, a great idea!